Too Large to Eat – Only Fit for Seed!

In our last post, Movin’ on Up the Block, we hinted at some fun (and absurd) history surrounding the historic building that’s home to our new office and the land upon which it sits. We think you’re going to love this story just as much as we do.

While we personally think most history is fairly interesting – especially the kind you dig up on a building you just purchased – sometimes you find something a little more… out of the ordinary.

Now, we’re not talking about how two of the biggest surnames in Loveland history, Spotts and Ivers, owned plumbing and electrical businesses at 501 Cleveland in the 1910s. Ivers even held the office of Mayor of Loveland twice!

Nor are we referencing the super cool fact that in the 1920s the Loveland Post Office found a home in this same location.

We have to go back a bit further to find the hilarious historical tidbit in question. 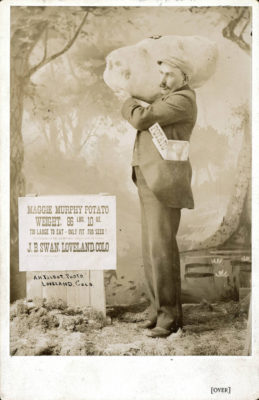 Cue the story of the Mammoth Potato Hoax and what very well may be the first viral photo.

It’s likely that most residents of Loveland either knew the spud farmer, Joseph B. Swan, or had heard tell of him in the late nineteenth century. He certainly was proud of his potatoes.

He had reason to be proud, too. Due to the Panic of 1893 and dry years of the early 1890s, agriculture development in northeastern Colorado had slowed. But Mr. Swan was excelling. In fact, he was doing so well that he grew 26,000 pounds of potatoes on a single acre of land in only one year. Or so he said.

But selling them? It seems that Joseph B. Swan wasn’t the best at marketing his potatoes. That is until the editor of the Loveland Reporter, W.L. Thorndyke stepped in and came up with an idea to help promote Swan’s potatoes at a local street fair.

The plan? Create a fake photograph of Swan parading a potato the size of a small boulder.

This is where our previously-mentioned photography studio enters the picture. The two men went to A.H. Talbot and enlisted his services. Likely taking much longer than it would take someone in Photoshop today, Talbot was able to take a photo of a potato and enlarge it. He then took a wooden board that he cut to the size and shape of the potato and attached the enlarged photograph to it. The last part of the hoax included posing Swan holding the giant potato board on his shoulder.

Swan was posed next to a crate, with a sign affixed noting the weight of the “Maggie Murphy Potato” as 86 lbs. 10oz, and “Too large to eat – only fit for seed!” On the back of the photo, a note had been added claiming that the giant potato measured 28” long and 14” wide.

The photograph was then passed around as an advertisement, but circulated through the community so much that it began infiltrating neighboring towns. The story goes that someone in an adjacent area liked the image so much that they pinned it on their office bulletin board. As people passed by the image, many ended up requesting copies of it.

By mid-1895, the photo landed in the hands of the editors of Scientific American. Unfortunately, the editors did not realize the image was fake and promptly created a high-quality engraving of it that they then published as a real news item in their September 18th, 1895 issue. 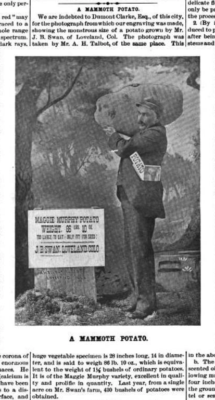 Several weeks later, the Scientific American realized their error and published a retraction, but the damage had already been done. Word spread of the massive potato all across the world, causing Swan to be inundated with requests for seeds from the potato or pieces of it so that they could try and grow their own mammoth spud.

While Swan repeatedly tried to explain to people that the photo was fake and it was merely created as an advertisement, he only fanned the flames. For several years after, rumors of the mammoth potato continued to spread. He eventually gave up and started telling people the potato had been stolen.

Now to be clear, the original structure that housed Talbot’s studio was one of two wood frame structures that stood on the land before they were razed in the 1930s to build the masonry structure that is the bones of the current building. Either way, we’re considering this location hallowed ground in the history of viral photos.

Stay Up to Date

Subscribe to our spam free newsletter for all our latest updates and resources delivered to your inbox. Unsubscribe anytime.

Thanks for subscribing! Please check your email for further instructions.

Something went wrong. Please check your entries and try again.